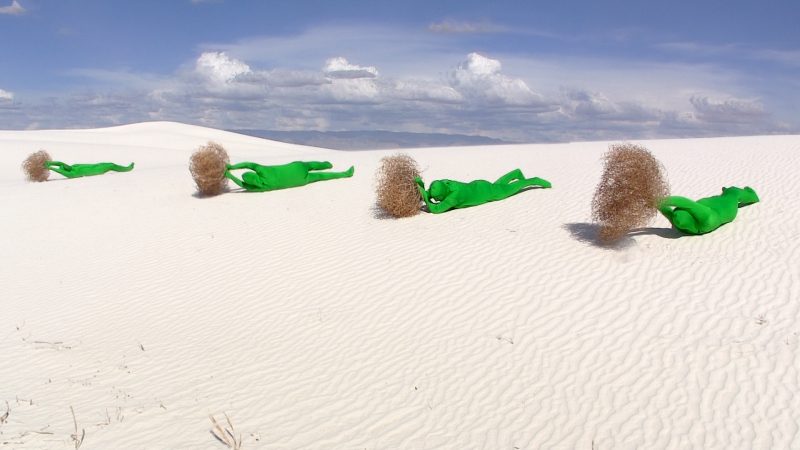 In the summer and fall of 2019, I carried out endurance performances at White Sands National Park and Missile Range. These unsanctioned performances were witnessed by tourists and park rangers as I performed for them while shooting myself with a still and video camera.
The sun was direct and reflected off the gypsum dunes. There were high winds and temperatures exceeded 100 degrees Fahrenheit (38 degrees Celsius). As I became my own “stunt double” or stunt solo in a green chroma key suit, I manually tumbled my body holding tightly to a large tumbleweed above my head. I rolled westward across the crushed and uneven gypsum dunes for 4-5 hours a day. The land was dangerously remote, extremely dry, and without cell phone signal. It became disorienting due to the heat and reflective quality of the gypsum “sand”. Taking many breaks was necessary for water, snacks, and to resettle my eyeballs after the sun-strobe afterimage effects. The dunes create low visibility which makes it difficult to see the horizon line, and high winds erase all of my footprints. It was challenging to re-find my car, venturing too far in the stunning 224 miles of designated park.
Several plants qualify as tumbleweeds (also called “wind witches”). They are invasive unwanted plants, a symbol in Western films of an absurd declaration: and awkward silence, a bad joke, a dual between two characters, and most interestingly for me…an opportunity to perform for the camera and to reflect on another cycle of land misuse. Tumbleweeds are emblematic of the Dust Bowl or “Dirty 30s”: severe drought, agricultural depression, all due to unethical and misinformed social and agricultural practices on the stolen land, migratory Tularosa Basin of the Apache people, and Mescalero Apache people.
These land misuses continue as White Sands was re-designated in December 2019 by the US Government Trump Administration from the status of National Monument to National Park. This determined additional “use” of the land with a significantly increased budget and infrastructure for even more missile testing. This will create developments in satellites, Space travel, more death weapons, and more pollution for the people in New Mexico.